About Heavy Bleeding and Menorrhagia

Uterine bleeding is defined and characterized by:

Women can experience heavy menstrual bleeding for a number of reasons, some of which are unknown. Common or potential causes can be broken into two categories:

Fibromuscular growths, also known as myomas or leiomyoma, can be found:

Symptoms of polyps and fibroids

Heavy menstrual bleeding that is not caused by an anatomical abnormality could be cause by:

Other common hormones include:

A hormonal IUD releases a hormone (e.g. levonorgestrel, LNG-IUS) which thins the lining of the uterus and reduces/eliminates menstrual blood loss

This procedure may provide temporary relief of heavy periods, but may need to occur more than once if heavy bleeding persists

Endometrial ablation is the surgical destruction or removal of the endometrial layer of the uterus. It is only suitable for women with heavy bleeding for benign reasons, who have completed childbearing

Endometrial ablation is less invasive than hysterectomy and is associated with fewer complications and a shorter recovery time. Women are typically able to return to normal activity within a few days.

A major surgical procedure that removes the uterus entirely. It is performed in a hospital under general anaesthesia and may require a recovery period of up to 6 weeks.

What is Thermablate Endometrial Ablation?

Thermablate EAS is a clinically proven, gentle, two minute treatment that can significantly reduce or stop the flow of your heavy menstrual period.

How does it work? 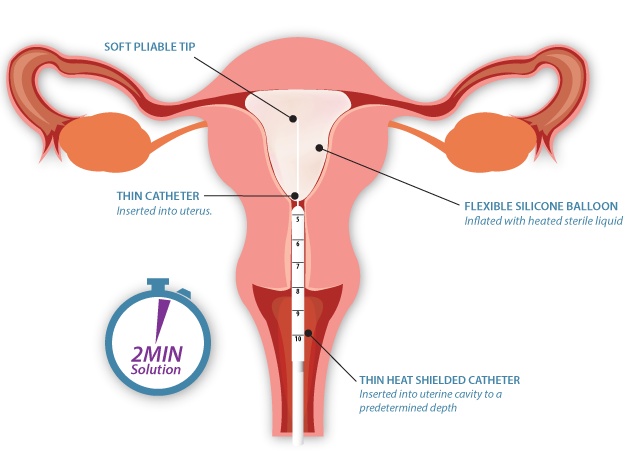 Is Thermablate Right for You?

Your doctor will assess several factors in order to determine if Thermablate is the right treatment option for you and your heavy period.

Your doctor will help you understand potential risks associated with the procedure as well as the likelihood of mild side effects such as cramping, nausea and vomiting, spotting and/or discharge post procedure.

Lifestyle Benefits of a Thermablate Treatment

Many women have learned to accommodate their heavy periods throughout their daily life – but at a high cost. Dealing with the intensity of a heavy period can be expensive, frustrating, and extremely limiting.

The National Women’s Health Resource Center conducted a national survey of 653 women between the ages of 35 and 49 with heavy menstrual bleeding, to examine excessive menstrual bleeding and its negative impact on daily activities (graph below): 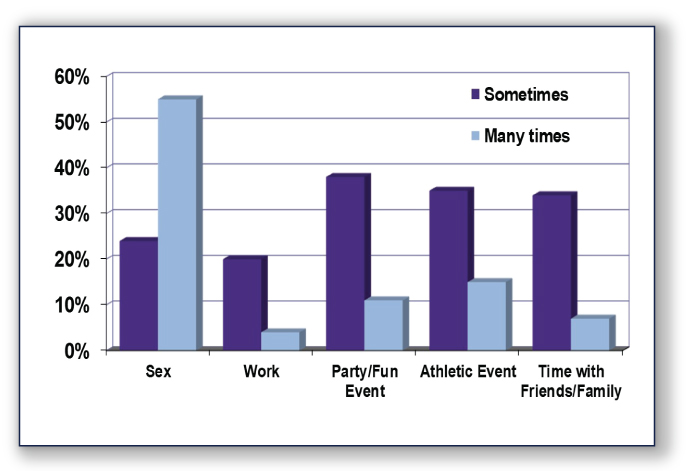 The Procedure: Before, During and After

Prior to treatment, general or local anaesthesia is administered to the patient as Thermablate is safe and suitable in both inpatient and outpatient settings.

Nurses or the physician have already inserted the Thermablate catheter into the Treatment Control Unit and have switched it ON; the heating process takes about 10 minutes.

Step 1:
Prior to treatment, your gynaecologist will take a quick look inside your uterus using a diagnostic hysteroscope; a thin lighted tube with a camera on the tip, to assess the uterine cavity and ensure there are no perforations or abnormalities of any kind.

Step 2:
Once your doctor is ready, he/she will gently insert the balloon tip catheter into the uterine cavity and initiate treatment.

Step 3:
The balloon will inflate and deflate 3 times throughout the 2 minute treatment. Liquid is pumped back and forth through the heat shielded catheter and into the balloon, to ensure temperature consistency.

The balloon lightly touches the walls of the uterus and gently destroys the endometrial layer using thermal energy.

Step 4:
After 2 minutes and 6 seconds, the procedure is complete.Your doctor will use the hysteroscope once more to ensure treatment has been effective.

With a successful Thermablate treatment, a patient may experience these eventual outcomes:

Pain and/or discomfort post ablation are usually minimal and can be similar to menstrual cramps. You may also experience mild nausea and/or vomiting, which can be controlled or quelled with a prescription from your doctor (e.g. Ibuprofen).

The majority of women experience positive changes in their life after a Thermablate procedure:

FOR PATIENTS
Go to Top