The Thermablate Endometrial Ablation System is a clinically proven, gentle, two minute treatment that can significantly reduce or stop heavy menstrual periods for women who have completed childbearing.

Thermablate EAS is a one-time, non-hormonal treatment that reduces the need for major surgical intervention such as hysterectomy.

How does it work?

The Thermablate EAS is made up of a Treatment Control Unit (TCU) and disposable cartridge, often referred to as a balloon catheter.

A Thermablate disposable cartridge is comprised of a slim diameter heat shielded catheter and a soft tipped silicone balloon.

Prior to treatment, the cartridge is connected to the TCU in order to heat the sterile fluid contained in the balloon.

The balloon catheter is gently inserted into the uterine cavity. The TCU automatically transfers pre-heated liquid through the catheter, directly inflating the silicone balloon,
which conforms to the shape and size of most uterine cavities.

Thermal energy is transferred through the balloon, which ablates the endometrial layer of the uterus in two minutes and six seconds.

A Thermablate procedure can be performed under local or general anaesthesia with a quick recovery time and no side effects.
Learn more about Thermablate in an outpatient setting here

Proper patient selection is very important to consider. Not all women can undergo a Thermablate treatment. Patients should always be evaluated thoroughly prior to treatment to rule out any underlying causes of their excessive uterine bleeding.

Potential Thermablate patients must meet certain criteria to be eligible for treatment:

It is important to rule out contraindications prior to treating a patient with the Thermablate system. Most importantly, patients should understand that becoming pregnant after a Thermablate procedure is possible but it may be unsafe for both the mother and the fetus. Proper birth control counselling should be provided to patient’s pre and post procedure.

Repeat endometrial ablations should not be offered or attempted with Thermablate EAS as the uterine cavity is likely distorted. 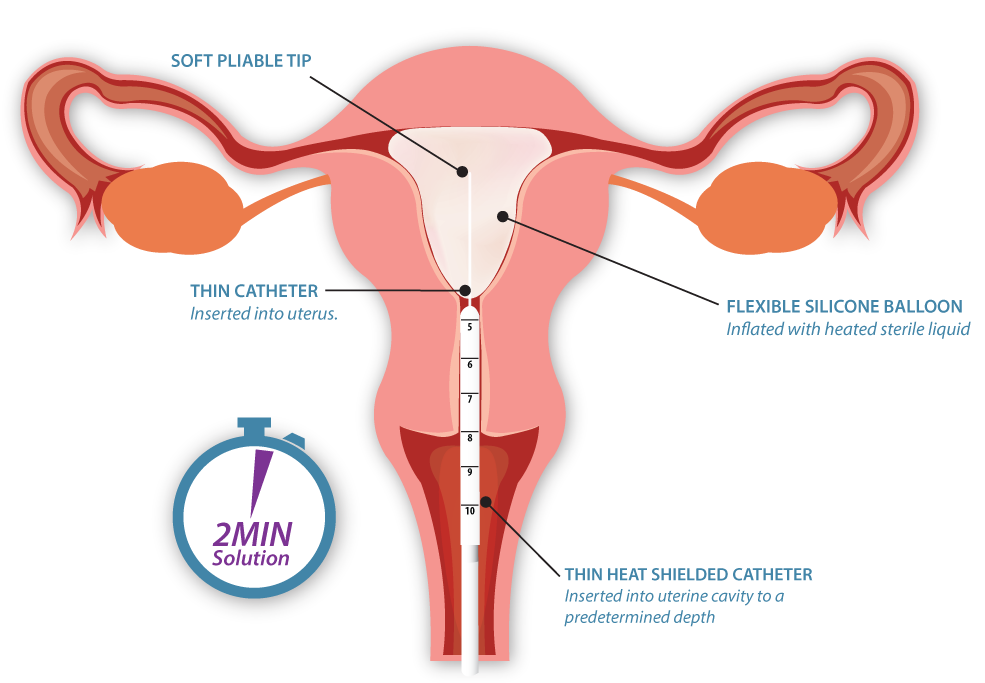 Benefits of the Balloon and Long Term Results

Proven long-term results demonstrate high efficacy and patient satisfaction, as well as low re-intervention in the form of hysterectomy

At a Median of Five Years

A study comparing the incidence of De Novo Pelvic Pain within 2 years of either Radiofrequency (RF) or Balloon Ablation found that:

A retrospective review comparing outcomes of patients treated with Thermablate (N=175) and Novasure (N=133) over 5 years showed “An eventual hysterectomy was carried out in 18.7% of the Novasure women vs 8% of the Thermablate group.” 5

These data are further supported by the findings in Figure 2, which shows that of 3861 endometrial ablations performed from 1999-2004, a larger percentage of patients treated with Radiofrequency (NovaSure) ablation underwent eventual hysterectomy when compared to Thermal Balloon patients.6

FOR HEALTHCARE PROFESSIONALS
Go to Top